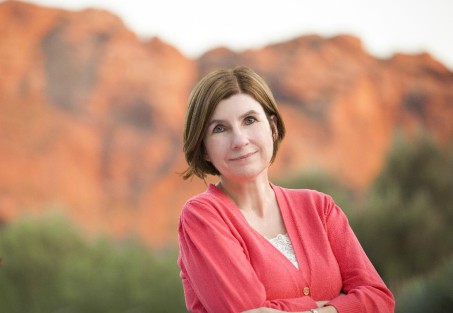 Jeanne Lyet Gassman’s debut Christian historical novel, a compelling story called Blood of a Stone, is scheduled for release from Tuscany Press in March, 2015. Don’t miss it! The book already has 4.8 stars on Goodreads from pre-pub reviews. Reviewers have praised the book for its immersion into time and place, complex characters, and fast-paced plot.

Set in the first century on the edges of the Roman Empire and the Jesus movement, Blood of a Stone is a sweeping story of murder, betrayal, love, and the search for redemption.
Faced with the brutality of slavery, young Demetrios confronts his master and flees by the blood of a stone. Determined to escape his past, he struggles to create a new life and a new identity with his friend and fellow escaped slave, Elazar. However, freedom has its price. Secrets cannot remain secret forever. A chance for love is lost. Elazar betrays Demetrios to a so-called prophet named Jesus of Nazareth. Fearing the Roman authorities and Jesus, Demetrios risks everything to silence those who would enslave him again. His quest leads him to startling discoveries and dire choices. Demetrios must answer the question we all ask: Can we ever be free of our past?.

I was delighted to have a chance to interview Jeanne about her book, and here’s what she had to say:

Believe it or not, the story of Blood of a Stone was inspired by a dream my husband had. He told me about this vivid dream of Burt Lancaster directing a movie about an escaped slave in First Century Palestine. I latched onto the idea and whipped out 65 pages of a novel in about three days. Some of those pages even made it into the final version of the book! Of course, the need for more research is what ultimately slowed me down. I had to stop spinning my tale at some point and go back and research the time period and lifestyle.

My research for Blood of a Stone took me in all sorts of interesting directions: I collected a huge library of books and professional journals. I interviewed experts on flora, fauna, clothing, and customs. I visited museums and botanical gardens. I even cooked a few of the meals mentioned in the book, using spices I knew would be available during the First Century. During the final revisions of the book, I worked with a historical expert who reviewed the entire novel for historical accuracy. He was a wonderful resource, and we had a great time bouncing ideas back and forth. We discussed everything from character names to hair styles to magic spells.

As a slave during this time period, Demetrios belonged to the lowest stratum of society. His father sells him for a pittance to a brutal Roman master who abuses him, but Demetrios refuses to remain a victim. In Blood of a Stone, I wanted to explore what it would be like to rise out of slavery and create a new life and new identity. How would a character’s past life affect his present choices? Could he reinvent himself? Could he find peace and happiness? Or would his past overshadow his efforts to become truly free?

The central theme of Blood of a Stone is one of forgiveness and offers a message of Christian hope. Aside from experiencing the world and life of First Century Palestine, I would hope that readers would find inspiration from Demetrios’s story.

My next book, The Double Sun, will be completely different in that it’s set in mid-20th century America during the Cold War. It’s a story about a family whose lives are deeply intertwined with the atomic bomb tests in Nevada and the nuclear industry. However, if Blood of a Stone is successful, my publisher and I have talked about writing a sequel about Tabitha. I adore Tabitha and know her story well. It would be a pleasure to revisit this world and follow Tabitha’s life journey before and after Demetrios. (Hint: That’s as close I will get to a spoiler!)

JEANNE LYET GASSMAN lives in Arizona where the desert landscape inspires much of her fiction. She holds an MFA in Writing from Vermont College of Fine Arts and has received fellowships from Ragdale and the Arizona Commission on the Arts. In addition to writing, Jeanne teaches creative writing workshops in the Phoenix, Arizona, metropolitan area. Her work has appeared in Hermeneutic Chaos Literary Journal, Red Savina Review, The Museum of Americana, Assisi: An Online Journal of Arts & Letters, Switchback, Literary Mama, and Barrelhouse, among many others. Blood of a Stone is her debut novel. Find Jeanne online at: www.jeannelyetgassman.com